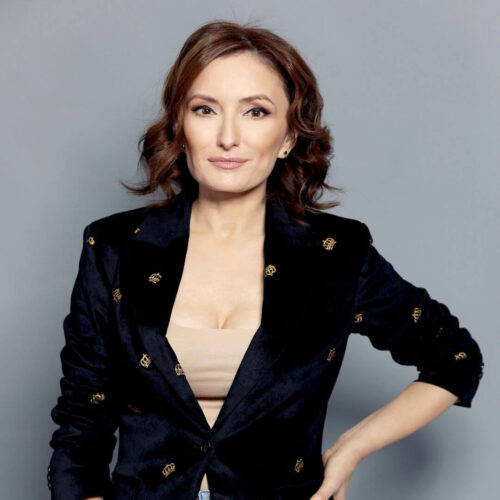 Paula Herlo, Senior Correspondent and Producer for „România, te iubesc!” („Romania, I Love You!”) News Magazine, delivers every Sunday outstanding journalistic investigations on critical issues concerning Romanian society. The weekly show has been constantly watched for over 13 years by millions of Romanian viewers, who placed it on top of Superbrands news shows ranking.

Paula Herlo has been working with PRO TV News since 1998 and has constantly built a highly regarded professional profile. Her dedication in reporting and designing the News Campaign, Any Idea What Your Kid Is Doing Right Now? would bring PRO TV News the much-coveted International Emmy Award for Outstanding News, in New York, in 2008.

She continued coordinating social campaigns for PRO TV News: There’s Life In Our Blood and I Want Parents, Too led to establishing the National Unrelated Donors’ Registry and modifying the Adoption Act, respectively; Be Healthy, Romania!, pictured the National Health System’s own diseases, and 2014’s Any Idea What Your Parents Are Doing Right Now? focused – for the first time – on the life of the lonely elderly.

Paula Herlo is also an honorary president of the „Dăruiește Viață” (“Give Life”) Association. Backed by campaigns on PRO TV News, the Association raised 40 million Euros, later invested in Romanian hospitals for the benefit of cancer patients.

Part of the money funded the first Molecular Cytogenetics Laboratory in Romania, which precisely diagnoses forms of cancer. Other sums endowed the ICU of Pediatric Oncology Hospital in Timișoara, where a stem cell bank was also equipped.

”Dăruiește Viață” (Give Life) Association is currently finishing the building of the first public hospital in Romania financed entirely by private donations. It will open for patients next year, and it will be the biggest, state-of-the-art Pediatric Oncology and Trauma hospital in Romania. The project gathered together 350,000 individual donors and over 4,000 companies. ”Dăruiește Viață” plans to expand this initiative and rebuild the Marie Curie pediatric emergency hospital in Bucharest, the largest hospital of its kind in the country. When finished, it will too meet West European standards.

© Copyright TEDxBaiaMare - This independent TEDx is operated under license from TED

This website uses cookies to improve your experience while you navigate through the website. Out of these, the cookies that are categorized as necessary are stored on your browser as they are essential for the working of basic functionalities of the website. We also use third-party cookies that help us analyze and understand how you use this website. These cookies will be stored in your browser only with your consent. You also have the option to opt-out of these cookies. But opting out of some of these cookies may affect your browsing experience.
SALVEAZĂ ȘI ACCEPTĂ